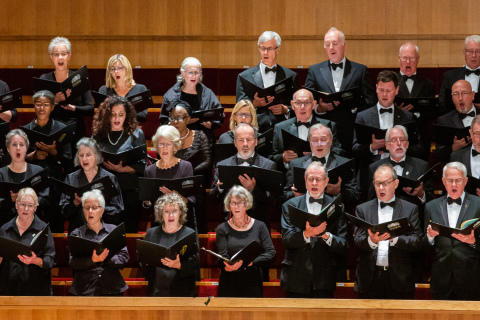 Among numerous concert highlights, there was widespread praise for the choir’s affecting selection from West Side Story, its final piece before the joint finale.  The CMVC won resounding applause for its a capella rendition of the traditional spiritual Go Down Moses.

The concert was four years in the making, having been proposed in the pre-Covid era.  The outcome was a triumphant example of community spirit, with members of both choirs praising each other for their virtuoso singing.  There was special mention, too, for the five men who belong to both choirs and thus sang throughout the 80-minute concert.

Click on these links to enjoy the choirs' two finale pieces: 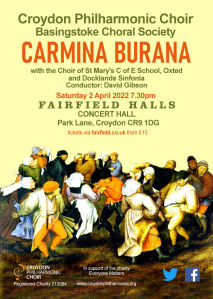 April 6: We won a fabulous review for our performance of Carmina Burana at Fairfield Halls on Saturday April 2.  It appeared in Inside Croydon, whose reporter Ken Towl wrote this:  "The performance of Carmina Burana was a testament to the way that the combined effort and skills of  composer, conductor, choristers, musicians and soloists can go to create something greater than the sum of its parts.  It was, in a word, sublime."  Our own music director, David Gibson, echoed those thoughts at our rehearsal the following Tuesday, when he said the concert had been the very best of his entire career.  He recalled the many tribulations the choir had endured before the concert was staged, having been cancelled with just days to in March 2020 because of the Covid lockdown.  There were numerous hitches in the run-up to the concert too which the choir and its committee had overcome with aplomb.  And the performance itself was a triumph, thanks to the orchestra, soloists and the choir itself, with its guests from the Basingstoke Choral Society, Croydon Male Voice Choir and other local choirs.  In short, a night to remember. 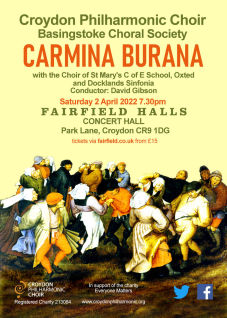 January 12 2022: Following our wonderful Christmas Concert at Fairfield Halls, we are now preparing for our return.  Our next concert there is on Saturday April 2, with the centrepiece the thrilling Carmina Burana by Karl Orff.  We were about to perform this in March 2020 when Covid wrecked our plans.  So we are delighted to be rehearsing it again in readiness for our next appearance.  We will be joined by our friends from the Basingstoke Choral Society, and will also be singing the evocative, sensual

Rio Grande, a jazz-age secular cantata by Constant Lambert.  The concert will be completed with another jazz-age piece from the 1920s, Leonard Bernstein's  Rhapsody in Blue, performed by the Docklands Sinfonia - all conducted by our music director, David Gibson. It promises to be a wonderful evening.  Tickets are on sale from the Fairfield online box office: fairfield.co.uk

A Christmas triumph at Fairfield Halls 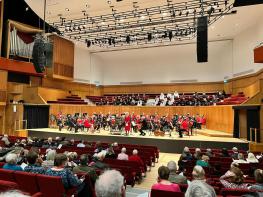 December 20: We had a fabulous concert at Fairfield Halls on Saturday December 18 (photo left).  We felt as if we were singing our hearts out to celebrate both Christmas and our return to peforming in Croydon for the first time since lockdown last year.  The London Mozart Players, who led the concert, hit breathtaking professional standards.  We sang three passages from Handel's Messiah, plus a mix of Christmas songs and carols, with full audience participation.  There was rapturous applause at the end and we went home on a lovely high!  We now have a short break before resuming rehearsals on January 11 (Covid permitting!)  Next up is a return to Fairfield Halls on April 2, when we shall be singing the repertoire from the concert planned (but cancelled) for March 2020.  The highlight is Karl Orff's exciting Carmina Burana and we will be joined by our friends from the Basingstoke Choral Society.  Tickets are now on sale from the   Fairfield online box office:  fairfield.co.uk

Tidings of Christmas joy! See us at Fairfield Halls! 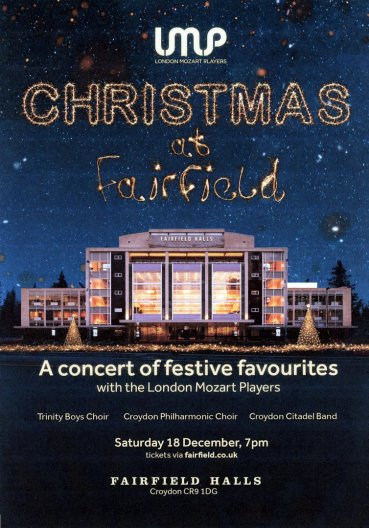 We are so looking forward to our Christmas appearance at Fairfield Halls!  We are singing at A Concert of Festive Favourites, led by the wonderful London Mozart Players, and featuring guest perfomers including ourselves.  It will mark our return to the Fairfield Halls following our acclaimed performance  of Verdi's Requiem, also with the London Mozart Players, in October 2019.  We are getting lots of media attention. There is an excellent report in Inside Croydon: HERE   And here is a link to the LMP's heart-warming publicity video: HERE.    The concert is on Saturday 18 December, starting at 7pm. Tickets sales are going well, so do not delay in buying yours (if you have not already done so).  Fairfield box office link: HERE

Live rehearsals are back! 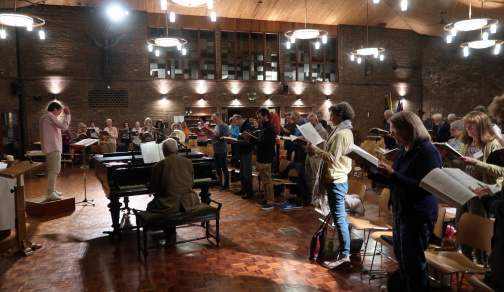 At long last, we have returned to live rehearsals! We held our first on September 7 at our customary venue, St Matthew's in Chichester Road, East Croydon, (see photo), focussing on a new selection of pieces for our Choral Gems concert in Basingstoke Anvil, with our friends from Basingstoke Choral Society, on Sunday November 14.    And on December 18 we are taking part in an exciting Christmas Concert at Fairfield Halls, led by the brilliant London Mozart Players.  Our programme for 2022 is taking shape too - see Our Concerts page. 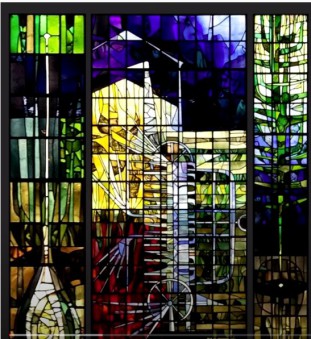 Despite all the disappointments and setbacks, we were determined to keep the spirt of the choir alive during lockdown.  We recorded ourselves singing that wonderful anthem of hope and togetherness, You'll Never Walk Alone.  Twenty-two choir members took part, with our music director David Gibson accompanying them on piano. As well as demonstrating the choir's commitment to excellence in singing, it is also an opportune technical achievement in which a number of committee members played key parts. So   CLICK HERE to see us sing.  The photo shows one of the magnificent windows at St Matthew's Church, where we rehearse in normal times, which appears at the start of our recording. 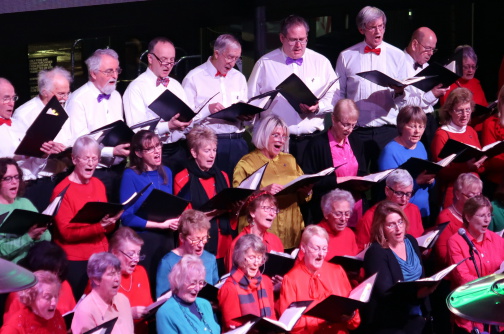 The choir raised £400 for Floating Shelter, a charity for Croydon's homeless, at its Christmas Cheer concert at St Matthews church on Monday 16 December - this was in the pre-lockdown era in 2019.  The charity is backed by some 30 Croydon churches and provides food and beds for the homeless during the Christmas period.  The sum of just over £400 was donated by members of the 180-strong  audience, who had responded enthusiastically to a rousing  concert programme.  The choir sang works by Bach and Vaughan Williams and led the audience in singalong carols.  Renowned trumpeter Crispian Steele-Perkins. supported by choir music director David Gibson on the organ, delivered further musical treats. and there were strong performances by baritone Edmund Saddington, cellist Ellen Baumring-Gledhill and pianist Siobhain O'Higgins.   The concert followed a hour-long performance by the choir at the famous East Croydon Boxpark on Sunday 8 December (photo above).  Next up is the choir's appearance for a performance of Carl Orff's Carmina Burana at the Fairfield Halls on Saturday 28 March. 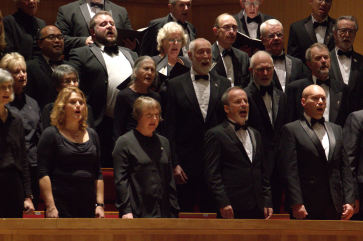 The Croydon Philharmonic Choir made an electrifying return to the Fairfield Halls on 26 October 2019, staging a performance of the Verdi Requiem that won outstanding praise from critics and audience members alike.

Inside Croydon acclaimed the choir for its “magnificent” singing, and a leading classical reviewer said the performance came close to matching the most moving he had ever heard ­­– in Rome in 1970,  conducted by Claudio Abbado and featuring Luciano Pavarotti and other classical superstars.  The reviewer, Jack Buckley of Seen and Heard International, also praised the choir for its vocal pronunciation and for singing from memory.

Experienced concert-goers also offered lavish praise.  One congratulated choir secretary Pedro Ferreira on “an amazing performance – the sound was astonishingly powerful”. Another said the evening was “a tremendous credit to the choir, orchestra and soloists”.  A third said those present “would be hard-pressed to realise you were not professionals”.

The 150-strong choir, which included guests from other local choirs, was making its first appearance at the Fairfield Halls following  its three-year closure. Conducted by music director David Gibson, it performed with the London Mozart Players, also returning to their home base, and four exceptional soloists: soprano Erica Eloff, mezzo Samantha Price, tenor Alberto Sousa and bass Nicholas Warden.  While praising all four, Buckley considered Erica “the outstanding soloist – chillingly dramatic and blessed with a perfect vocal technique”.

The 500-plus audience evidently agreed, delivering prolonged applause that intensified when David Gibson brought the choir to their feet.  Choir members were hard-pushed to remember a more thrilling occasion.

We are also thrilled to report that £717 was collected for the South East Cancer Help Centre, the Purley-based charity that we supported with the concert.

Come and join us!  Free offers!

We have almost 100 active members. We are always keen to have more, and we have some big offers for anyone joining us.   All new members get their first term free.  Tenors, basses and second sopranos can join for a whole year for free. There is a 50% discount for anyone under 30.  And full-time students pay nothing at all!

Singing is inspirational, beneficial - and fun.  If you would like to try us out, come to one of our rehearsals at St Matthew's Church in Chichester Road.  Proceedings start at 7.15pm.

You can contact us first, using the details on our website - or just turn up.  We welcome all voices - especially tenors and sopranos!  You will find us sociable and inclusive.  You don't need lots of experience - just a liking of music and a readiness to learn. If you decide you would like to join us, we can sign you up and you will be singing on stage with the rest of us in no time.

There are more details on how to take advantage of our big membership offers on the Join Us page.

We have produced an exciting short film showing us in rehearsal and in a concert performance.  It lasts just under eight minutes and provides a brilliant showcase of our appeal and our talents.  The film, produced by Anna Keel, shows us rehearsing and then performing  our concert at St John's, Upper Norwood on 4 November 2017, when we sang Dona Nobis Pacem by Ralph Vaughan Williams and The Armed Man by Karl Jenkins.  It also gives a sense of the choir's atmosphere and the pleasure and rewards its members find in singing. The film is to be shown in local cinemas and will act as a wonderful recruitment aid.  Just click on the link below to watch it!