100-plus years of Croydon Philharmonic Choir! 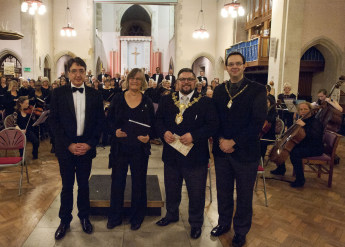 Croydon Philharmonic Choir is recognised as one of the finest choirs in southern England. We have a long and distinguished history, performing a rich and varied repertoire in Croydon and south-east England for the past century, culminating in the celebrations which marked our hundredth anniversary in December 2014. In addition to our usual concerts,  we held a celebration dinner and a range of other activities.  On the anniversary day itself, 6 December 2014, we staged a special performance of the Messiah at Fairfield Halls for which a number of past choir members returned to take part.  The concert raised funds for Shooting Star Chase, a brilliant local charity which supports local children who are seriously ill and their families.

We remain proud of our place in the Croydon community and this was confirmed  when Croydon's mayor, Wayne Trakas-Lawlor, attended our splendid Baroque Bliss concert in November 2016. Our photo above shows the mayor (centre right) along with (from left) our music director, David Gibson, our chair, Jill Aebi, and the mayor's consort and partner, Michael Trakas. Afterwards the mayor commented: "I could have sat there for hours listening to such wonderful music.  Croydon Philharmonic Choir is a wonderful organisation and we are extremely proud to support you during my mayoral year and beyond."

This was one of many scintillating occasions for the choir. We sing with major orchestras such as the BBC Concert Orchestra, the London Mozart Players and the Royal Philharmonic Orchestra. We have taken part in the BBC Proms in the Park, Songs of Praise and the Festival of Remembrance at the Royal Albert Hall. Led by our inspirational music director, David Gibson, we sing a rich and diverse mix of programmes and are supported by professional soloists and orchestras.

You can find out more about us and our distinguished history via the links on the left of the About Us page.