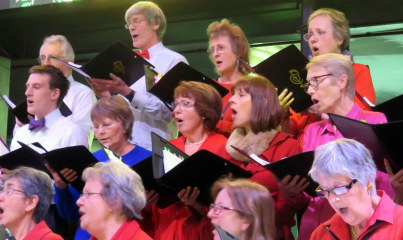 We have around 100 members, both men and women, from a range of ages and backgrounds.  We attract new members every year, while some members have been singing with us for forty years or more.  David Gibson, our music director,  a dynamic and inspirational leader with a wealth of experience who has guided the choir to ever-higher  standards, delivering memorable performances for our audiences.

The choir was founded in 1914 by Alan Kirby and its first performance, of Handel's Messiah, was held for the benefit of Belgian refugees at the start of WW1.  It soon became recognised as one of the best choirs in the country, particularly for its performances of Elgar. Kirby conducted the Choir until his death in 1959 and under his baton it became strongly associated with some of the leading figures in British music, performing with many eminent conductors, orchestras and soloists.

Kirby was succeeded by Myers Foggin and then in 1973 by James Gaddarn, who considerably developed the Choir's repertoire and versatility. His tenure included the commission and first performance of two major works - Heloise and Abelard by Dame Elizabeth Maconchy and Antonín Tučapský's Stabat Mater. David Gibson became music director in 1999 - only the fourth MD in the choir's history.

The choir has an extensive repertoire, ranging from baroque and classic choral pieces to contemporary and modern music.  Major choral works we have performed recently include Mozart's Requiem, Handel's Messiah, Brahms' Requiem, Vivaldi's Requiem,  Jenkins' The Armed Man: A Mass for Peace and Rutter’s Requiem.  We usually receive excellent reviews! We also tackle such challenging lesser-known works as Handel’s Theodora, Chilcott’s Canticles of Light and Fanshawe’s African Sanctus, as well as popular pieces from film and opera.

We perform four concerts each year, including one presented jointly with Basingstoke Choral Society.  We regularly took part in the Last Night of the Croydon Proms at Fairfield Halls, a gala concert of popular classics. The choir participated in the concert celebrating the 50th Anniversary of Fairfield Halls in 2012,  performed with the Royal Philharmonic Orchestra, singing Beethoven’s Choral Symphony.  We have sung with other renowned orchestras including The London Mozart Players, the Philharmonia and the BBC Concert Orchestra.   We often have top-class professional soloists singing with us.

We perform regularly at the Fairfield Halls,  Croydon's renowned concert hall, usually in partnership with the London Mozart Players.  We have sung at other prestigious venues such as the Menuhin Hall, Guildford Cathedral, Royal Festival Hall, Royal Albert Hall, the Barbican and Cadogan Hall. We have sung further afield, at St David’s Hall in Cardiff and Birmingham City Hall. Every two years we perform with the Basingstoke Choral Society at Basingstoke's Anvil theatre and concert hall.  We sing at informal occasions too, like our appearance at Croydon Boxpark at Christmas 2018 - see photo above.

We have an annual all-day workshop which is aimed at improving our vocal techniques as well as providing an enjoyable social occasion.  We have other social events through the year.  We always welcome new members.  Please see our contact details to find out how to join us.

The photograph shows us singing at a concert at Fairfield Halls. We usually wear formal dress at big occasions like that.  For our summer concert the men  dispense with DJs and appear in shirt-sleeves, sometimes with a red bow tie. The women dress less formally too.