Highlights of the choir history

Taken from programmes and from ‘Croydon Philharmonic Society - Forty Years of Singing 1914-1954’ by Henry A. Sharp, F.L.A. a Vice-President of the Society.

The first President of The Croydon Sacred Harmonic Society in 1914 was Alderman Sir Reuben Barrow.

The first President of the new Philharmonic Society in 1919 was Alderman Howard Houlder.

In 1927 the President was Mr. Alderman G. J. Allen and the 16 Vice-Presidents included Sir Edward German and were headed by His Worship the Mayor of Croydon.

In 1943 there were two Patrons, The Mayor and the Bishop of Croydon, and the President was H.C.L. Fisher.

Other Vice-Presidents have included Sir Arthur Bliss, Miss Elizabeth Maconchy, (from whom we commissioned Heloise and Abelarde in 1979), Mrs. Ursula Vaughan Williams, widow of the composer, and of course Erica Eloff since 2008.

We have performed under:

1931 Elgar conducting us in The Dream of Gerontius.

1933 Elgar conducting us in a performance of The Apostles.

Vaughan Williams in 1945, in the first performance of his ‘Thanksgiving for Victory’, a Promenade Concert in The Royal Albert Hall.

Sir Arthur Bliss in 1955 in the first performance of his The Olympians, conducted by the composer at the Royal Festival Hall, a Royal Command Performance.

Sir David Willcox in 1977 for the Queen’s Silver Jubilee in the Royal Albert Hall (650 singers) and in 1995 for the 50th anniversary celebrations of V.E. Day in Hyde Park, in the presence of the Queen and visiting Heads of State. (11 choirs )

SOLOISTS:  Our President, Crispian Steele-Perkins has performed with us 6 times since 2008, and Erica Eloff, one of our Vice-Presidents, has sung with us 16 times since 2007.  Particularly famous names from the past include Isobel Baillie (10 times between 1928 and 1950); Heddle Nash (5 times between 1931 and 1950); Kathleen Ferrier in 1946 and 1948, Elizabeth Schwarzkopf in 1956, Owen Brannigan, Webster Booth, Roy Henderson, Helen Watts, John Carol-Case, Anthony Rolfe Johnson and Willard White in 1989, who sang Gerontius. Also Dame Myra Hess in 1954  and Nina Milkina in 1979, pianists.

The Queen’s Hall in 1934 (the choir’s London debut) and 1937, the year in which the choir was described by Constant Lambert as ‘a fine body of singers’, ‘the year that saw the choir placed firmly on the musical map of London’. (Forty Years of Singing).  (The Queen’s Hall was the home of the Promenade Concerts until the war, when it was bombed).

In 1946 the choir was described as ‘the best choir in the south-east of England’.

The Royal Albert Hall between 1939 and 2006 23 times, sometimes singing with other choirs and including 13 Promenade Concerts and 5 Festivals of Remembrance.

The Royal Festival Hall between 1951 (when we sang at the opening concert, the only choir outside London to be invited) and 1997 16 times.

1937 The first performance of Vaughan Williams’ Five Tudor Portraits. A studio broadcast, and it was broadcast overseas the next day.

1944 ‘The Apostles’ – the last part broadcast. The Musical Times critic deemed the choir ‘one to belong to the whole country rather than a suburb’.

1946 35 members joined the BBC to make a carol recording for broadcast to North America.

1953 An invitation by the BBC for a studio performance of ‘The Apostles’.

1954 Male voices were invited by the Nixa Record Co. to take part in a recording of Brahms’ Alto Rhapsody with Monica Sinclair.

Maconchy’s Eloise and Abelarde (1979), commissioned by the Croydon Philharmonic Choir, and in

IN THE PRESENCE OF ROYALTY

1955, November, the St.Cecilia Day concert in the Royal Festival Hall in the presence of the Queen.

1995  May 7th. Ceremony of Peace and Reconciliation in Hyde Park in the presence of Her Majesty the Queen.  (11 choirs, conducted by Sir David Willcocks).

1997  July 4th  The Royal Silver Jubilee Celebrations at the R.A.H.  in the presence of the Duke and Duchess of Gloucester.

All five Festivals of Remembrance in the  presence of the Queen and other members of the royal family.

The first performance of the Free Churches in Croydon was of ‘Messiah’ on December 2nd, 1914 in the Congregational Church, Aberdeen Road, South Croydon.  There were 70 singers, and the performances yielded a profit of £25 which was handed over to the Mayor of Croydon’s branch of the Belgian Relief Fund.  Despite the war, it was decided to form a permanent choir, The Croydon Sacred Harmonic Society, whose first performance was ‘Elijah’ in 1915 in the Parish Church (now the Minster). Chorus and members of the London Symphony Orchestra together numbered 120.  In 1919 the choir became The Croydon Philharmonic Society.

First performances were in the North End Hall, (later called The Civic Hall). After the war the choir used the Baths Hall. ‘It was quite the most uncomfortable and uninspiring hall imaginable.  It consisted of a bare building with a wooden floor laid over the top of a bath.  The society hired sufficient chairs for this space, and the committee spent the whole morning of the concert day dusting the chairs and arranging them and numbering them to agree with the seating plan.  Table tops and trestles sufficient to seat an orchestra of 50 were hired from a caterer and nailed together by a member who was, fortunately for the choir, a builder.  Timber of all descriptions was collected and transformed into tiering for the choir.  A full rehearsal in the afternoon and a concert in the evening completed a day which was decidedly strenuous for some members……All this continued for several seasons’. (Forty Years of Singing).  Later the choir performed again in the Civic Hall on Crown Hill, or in the Davis Theatre, ‘a vast arena, huge performing spaces’.  On Good Friday in 1946 the choir performed The Messiah in the Davis Theatre to an audience of 3000.  It was in the High Street, just south of Wrencote, where Leon House now is.  Both halls were later demolished.

During the war performances were given in the afternoons to avoid air raids and the blackout which was in place.

We were present in Fairfield for the acoustics test in 1962 and from then on our regular concerts were given there.  The hall is famous for its excellent acoustics.  It seats 1550 audience and 250 choir, and we could get good audiences, and even gave 2 Christmas concerts each year, one at 3pm and one at 7.45, initially with a host from the world of entertainment, perhaps a soloist, and later with the participation of bands or choirs from local schools.  At Christmas in 1983, the choir was joined by the children of Park Hill School, conducted by Gwen Rabinowitz, who is still singing with our altos.  The two Christmas concerts were reduced to one in 1998.  But the hall was hugely expensive, (around £7000) and despite sponsorship from The Drummond Centre, the National Westminster Bank, John Lewis Partnership, Catherine Johnstone Recruitment and other companies, the shrinking audience size meant it was no longer possible to give regular concerts there.  Support from the borough had ceased in 1996. Our last concert there as a regular venue was in November 2007, when Erica Eloff first sang with us and the choir numbered 100.

Since then we have sung in various local churches, and have established a pattern of joining David Gibson’s choir in Basingstoke each year, singing in Basingstoke, Winchester Cathedral, or Guildford Cathedral.  Our Christmas concerts have become more intimate and informal, and the tradition of serving mulled wine and mince pies was started.  Likewise we started to serve refreshments at our other concerts.

Performances are usually under our conductors’ ensembles, the London Orpheus Orchestra under James Gaddarn and the New London Sinfonia under David Gibson.  But we have also performed with The London Philharmonic, The Royal Philharmonic, The English Symphony, The English Chamber, The New Queen’s Hall Orchestra and The Bournemouth Symphony Orchestra.  We have performed with The London Mozart Players (who are based in Croydon) at least 6 times.

Our founder, Alan Kirby, died in 1959 and left the choir £5000.  On the death of his widow, Ethel Kirby in 2005 (who accompanied the choir in the early years and later was the chorus secretary for many years) the choir received half the value of her house. 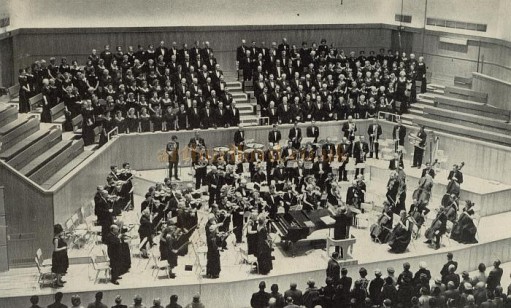 The choir at the Fairfield Halls in the 1960s